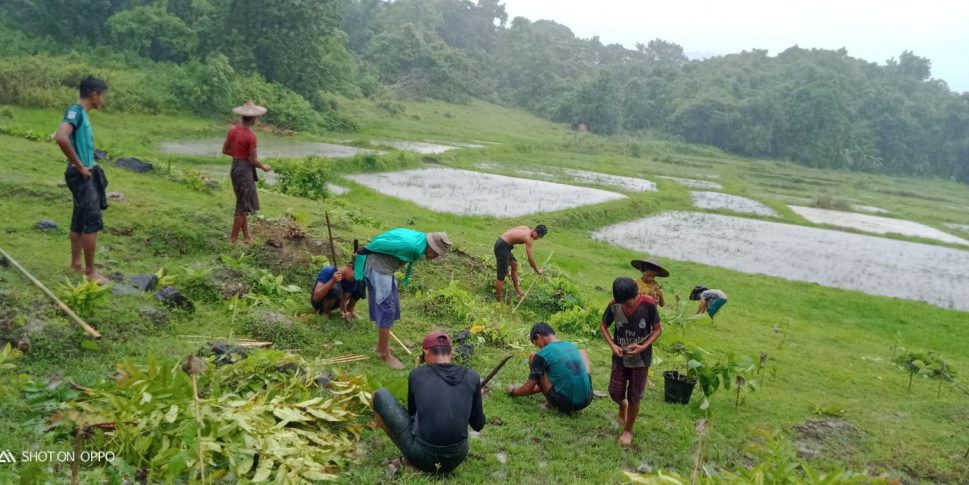 Three hundred (300) of these seedlings were planted in the Ayeyarwady Delta, Pathein Township, Shwe Thaung Yan town from Pontamau Island, the capital of Irrawaddy Region. Local partners laud this initiative because it strengthens the island’s role as a natural barrier for coastal villages against storms and tidal waves, and, serves as a shelter for vessels during stormy weather.

The balance were planted in southern Rakhine State’s Kyeintali Township in a village affected by flooding. One villager said, “[t]here is no more forest to contain the flood,” highlighting their importance in the villagers’ lives.  They relied on trees in stopping inundation from damaging properties, besieging roads, ruining harvests, and, in extreme cases, threatening lives.

Forests provide sources of income and nourishment, finding everything from firewood to mushrooms to honey in its deep woods, as well as natural counteraction to flooding.  Now, forests are critical in attaining the 1.5oC goal to avert climate disaster.

The United Nations Environment Programme states:
“[E]ach year approximately 12 million hectares of forest are destroyed. This deforestation, together with agriculture and other land use changes, is responsible for roughly 25 per cent of global greenhouse gas emissions. Deforestation and land degradation also undermine efforts to build resilience to climate impacts and threaten forest dwelling communities.”

This is the reason why the Conference of Parties (COP) under the United Nations Framework Convention on Climate Change (UNFCCC) has placed forest growing, protection and conservation as a critical element in climate mitigation.#