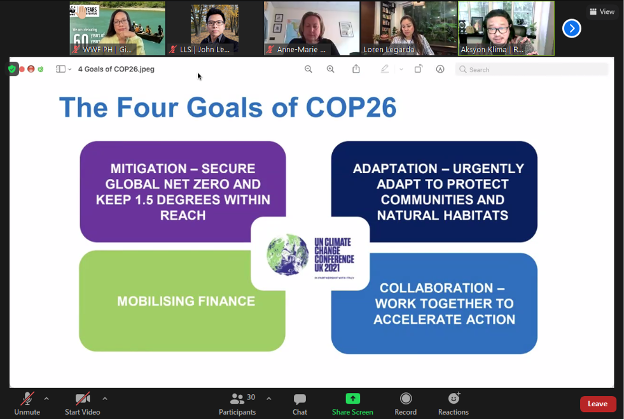 Rodne Galicha, lead convenor of AKP, emphasized the urgency of a global just transition to 100% renewable energy to avoid exceeding 1.5 degrees Celsius of global warming, which is one of the four main goals of the upcoming 2021 UN climate conference (COP26) in Scotland.

“We, therefore, call on all governments, financial institutions and all investing institutions to divest from dirty energy; and enhance their investment portfolios with RE,” he said. “We also call on the phase out of existing coal plants and to desist from building new coal-fired power stations.”

Galicha added that natural carbon sinks must be preserved to enhance climate change mitigation efforts, calling “to include peatlands and wetlands conservation in each country’s locally determined climate action”.

Regarding the conference, Galicha stated that it should be “mindful of the disadvantage to developing countries, which will not be able to send delegates because of vaccine inequality”.

He also expressed hope for the Climate Change Commission, the lead advisory policymaking body in the Philippines, to utilize inclusive processes and mechanisms for formulating positions to be carried by the national delegation to Scotland.

“We also hope to see portals for voluntary submissions that will be part of a technical report informing the negotiations process,” he added regarding inclusivity at the global level.

Other asks expressed by AKP during the event included: prioritization of climate finance through grants instead of loans; highlighting peoples-centric nature-based solutions; avoiding greenwashing, geoengineering and other false solutions; recognizing the role of faith-based communities as moral and active force for higher ambition; and accounting for climate justice when installing RE near local communities.#