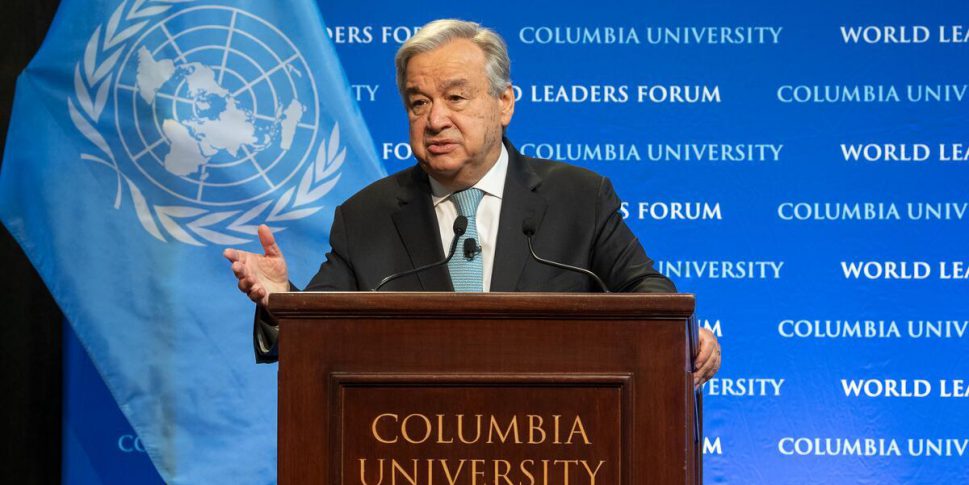 UN Climate Change News, 25 January 2021 –Speaking today at the virtual high-level Global Climate Adaptation Summit (CAS) hosted by the Netherlands, UN Secretary-General António Guterres called for 50% of the total share of climate finance to be spent on building resilience and adapting to the effects of a warming world.

With unprecedented climate extremes and volatility affecting lives and livelihoods on all continents, he spoke of a ‘heightened awareness of the importance of resilience,’ while pointing out the huge gaps that remain on financing for adaptation in developing countries. “Adaptation cannot be the neglected half of the climate equation,” he said.

Mr. Guterres called support for adaptation and resilience “a moral, economic and social imperative,” with one in three people today still not adequately covered by early warning systems. As illustrated by the Global Commission on Adaptation, just 24 hours warning of a coming storm or heatwave can cut the ensuing damage by 30%.

First, that by the UN Climate Change Conference, COP26, in Glasgow in November, all donors and multilateral development banks should commit to the goal of allocating over half of their climate finance to adaptation and deliver on it by 2024. On that note, he welcomed today’s commitment by the Summit’s hosts, the Government of the Netherlands.

He highlighted the recent UNEP Adaptation Gap Report that calculates annual adaptation costs in developing countries alone to be in the range of $70 billion dollars – with the likelihood of reaching $140-300 billion dollars in 2030 and $280-500 billion in 2050.

Second, that developing countries should receive the necessary support and tools to make climate-resilient investment decisions and budget allocations, particularly for infrastructure.

Third, that existing catastrophe-triggered financial instruments such as the Caribbean Catastrophe Risk Insurance Facility (CCRIF) and the African Risk Capacity should be scaled up, pointing out that: “For every dollar invested in climate resilient infrastructure, six dollars can be saved.”

Fourth, easier access to finance, especially for the most vulnerable, and expansion of debt relief initiatives.

Finally, support for regional adaptation and resilience initiatives, which would allow, for example, debt-for-adaptation swaps and provide much needed liquidity to vulnerable countries in dire need.

Speaking at the event, UN Climate Change Executive Secretary, Patricia Espinosa, said it was time to face reality:  “As current weather events already show, mitigation is not enough. The climate emergency is already here, and people are already suffering. We must get ready, be ready.”

In this regard, Ms. Espinosa underscored the important role of the Paris Agreement – that requires all countries to plan and implement adaptation by means of National Adaptation Plans (NAPs) – and of the Green Climate Fund (GCF), that is already actively supporting developing countries to prepare and implement their NAPs.

Underlining that the world has the tools, skills and opportunity to deliver “more, faster and better” adaptation actions, Mr. Guterres expressed his hopes that the Adaptation Summit can help secure the necessary breakthrough on adaptation and resilience and lead to ambitious outcomes at COP 26.

Two important initiatives launched at the Summit
During a virtual address to the Summit, UK Prime Minister Boris Johnson launched the ‘Adaptation Action Coalition.’ Developed by the UK in partnership with Egypt, Bangladesh, Malawi, the Netherlands, Saint Lucia and the United Nations, this new Coalition will work to turn international political commitments made through the United Nations Call for Action on Adaptation and Resilience into on-the-ground support for vulnerable communities.

The summit also saw the launch of the High-Level Climate Champions ‘Race to Resilience‘ — the sibling campaign to ‘Race To Zero‘ — by Alok Sharma, COP26 President designate. The campaign sets out to catalyze a step-change in global ambition for climate resilience, putting people and nature first in pursuit of a resilient world.#

The article was originally published at the UNFCCC website on 25 January 2021.